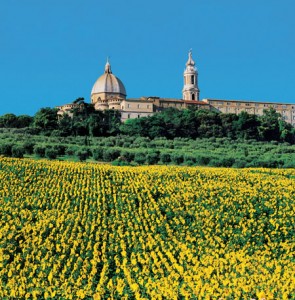 Easily accessible via low cost flights to Ancona, Pescara, Rimini or Perugia from London, Le Marche’s wonderful geographical diversity has led to it being labelled as ‘The Whole of Italy in One Region’. It remains a largely undiscovered gem in the heart of Italy, sandwiched between the stunning Apennine mountains on its western fringes and the beautiful Adriatic coast to the east.

Perhaps because Le Marche has historically been an isolated region, sheltered as it is from intrusion by its natural mountain borders to the north, south and west and by the Adriatic Sea, it is only slowly gaining rightful recognition overseas, although the Italians have long favored it for their own holidays. Often overshadowed by its better known and more touristy neighbours, Tuscany and Umbria, and strangely overlooked by the travel media, Le Marche can justifiably claim to be Italy’s very own Garden of Eden and hidden secret at that. Boasting lush greenery and an enchanting mixture of vineyards, olive groves, sunflower fields, abundant woodland and rivers which wind their way down to a beautiful coastline, topped off with stunning mountain scenery. The region has been labelled variously ‘the new Tuscany’ or ‘Poor man’s Tuscany’ and if the latter epithet has any credence, those venturing to discover its charms are sure to be blissfully happy in their poverty!

Known in English as The Marches, Le Marche (pronounced Lay Markay) derived its names from “marca” a mark or march, meaning a border province of the Holy Roman Empire, usually an unsettled frontier held by one of the Emperor’s warring barons. Le Marche was the boundary area between Papal and Imperial lands. Regardless of who claimed rulership of Le Marche, the people always maintained a sense of independence while nominally accepting the Pope as their sovereign. When Papal power waned, feudal warlords such as the Malatesta, Montefeltri and the Delle Rovere families took over, but the Papal States quickly moved in wherever a power vacuum existed. Napoleon interrupted Papal rule of Le Marche but it would otherwise continue until the battle of Castelfiardo in 1860, when the Piedmonte army of the House of Savoy defeated the Papal army. Le Marche was absorbed into the new nation of Italy shortly thereafter in November of 1861.

Laid back Marche is the summer destination that won’t have you shopping for home-made pasta amid home-counties accents, or paying a small mortgage for your villa. Too long in the shadow of its noisier neighbours Umbria and Tuscany, it offers generous helpings of rural Italy, with fewer tourists – and olive groves, vineyards, rolling hills, rambling farmhouses, Renaissance hill towns and the Adriatic rarely more than 30 minutes away. – The Sunday Times Travel section 26/2/12