Believed to have been a rural monastic retreat linked to the nearby abbey Abbazia Sant' Urbano, Monastero di Favari and its attached chapel sit in 6 acres of lovely mature grounds, including a red grape vineyard planted in 2008.

Built of local stone around 1680, the small regular brick shaped pieces historically denoted the owner’s wealth and status. The house remained under the ownership of two wealthy Jesi families, the Federicis and Pichiettis, for over 200 years until it fell into disrepair in the post war years. In the 1950s and 60s the villa was used as a school to educate children from the surrounding villages. In 1962 Vittoria, our current neighbour living opposite, hosted her wedding breakfast along the main corridor of the villa and her family, local farmers, used the derelict Monastero in the 70s – 90s to house their cattle and machinery on the ground floor. Vittoria’s farmer brother-in-law lived for several decades in very rustic style on the first floor with a basic kitchen. An outside staircase dating from the 1950s was added for this accommodation purpose. The current owner removed this to restore the villa frontage to its original state.

Discovered 14 years ago as a sleeping romantic ruin, Monastero di Favari has now been renovated to a high standard whilst keeping it’s character and soul strongly intact.
The Chapel was built in around 1750 and is dedicated to San Bernadetto. Regular village masses were performed here until the 1980s. During its restoration frescoes of angels were uncovered in the vaulted arched ceiling above the altar and the original vibrant colours, sky blue, yellow and pink discovered under many coats of whitewash. It is currently being converted back to use a working chapel for weddings, blessings and other events. 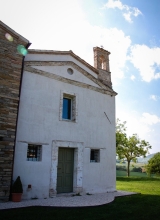 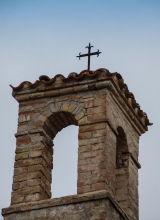 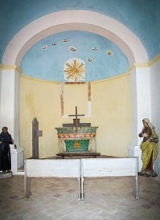 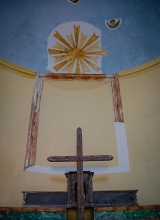 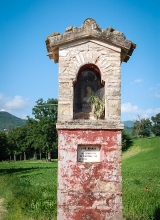