“Showcasing the bounty of the sea as well as the farm”. Le Marche is Central Italy the way it was before the foreign hordes invaded, and the cuisine has stayed completely traditional and close to its roots. 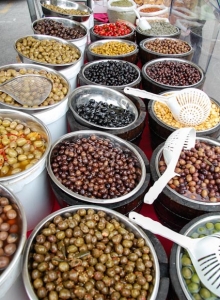 Cuisine in Le Marche is deeply rooted in peasant tradition and as with any rural diet, much use is made of food gathered from the wild; funghi, game, nuts, field herbs and – the area’s greatest culinary treasure – truffles. Waste, too, is frowned upon, and many of the now most fashionable dishes were first developed to use up such things as stale bread or the less appealing parts of the pig.

The Marche table is wonderfully varied and equally shares from the bounty of its coastline as well as its countryside. Each local area has it’s particular “cucina tipica”.

The sea provides the dish Brodetto the most famous fish stew of the Adriatic coast. It varies in form from each coastal town but must contain 13 types of fish. The Marche versions of Brodetto include red and gray mullet, cuttlefish or squid (or both), oil, garlic and saffron – served on either fried or toasted bread. Other seafood favourites include the port of Ancona’s Stoccafisso (dried codfish, which is not native to the Mediterranean), and local varieties like sole, bream, clams and mussels.

The Marche countryside provides its traditional dishes, such as Porchetta (a whole pig stuffed with herbs, garlic, rosemary and fennel and roasted on a spit), free-range chicken, game birds (quail, pigeon), vegetables, olives, salamis, hams and sausages (the tasty prosciutto is typical, and becomes more and more rustic as you go inland; it is cut not in slices, but into chunks).

Vincisgrassi is the unique lasagna of Le Marche, made with ground pork, mushrooms, and bechamel sauce, without the usual tomatoes, and topped with local truffles.

The province of Pesaro is the biggest truffle producer in Italy, particularly of the prized white truffle. The truffle “capital” in Le Marche is Acqualagna, between Pesaro and Urbino in the north, and is home to the famous truffle market. The highly fragranced tubers (white, black, grey, purple, hazelnut- and earth-coloured), can be found often in the local gastronomy and impart strength and character to many local dishes.

Both meats and fish are usually prepared either in a porchetta style stuffed with fennel, garlic and rosemary or potacchio (with onion, tomato, white wine and rosemary).

For an antipasto, mountain salt-cured ham and lonza (salt-cured fillet of pork) reign supreme. If you see it, also try ciauscolo (a soft, spreadable pork salame).

The classic primo is a generous plate of tagliatelle dressed with a sugo, or meat sauce. The capital of Le Marche, Urbino, is famous for passatelli, strands of pasta made from breadcrumbs, parmesan cheese, and egg cooked in broth. Apart from the ever-present meat grilled alle brace, on embers, delicious stuffed pigeons (piccione ripieno) and rabbit cooked with fennel (coniglio in porchetta) are a Marche speciality. In some areas, stewed snails (lumache) occasionally creep on to the menu.

The sheep’s milk Pecorino cheese, especially young Pecorino is the most favoured cheese of Le Marche but Casciotta d’Urbino (PDO) is also popular. . Look out, too, for formaggio di fossa, a strong-flavoured cheese aged by being walled up in limestone holes in the ground.

For a snack on the move, try the local piadina, a flat, unleavened bread often served with cold meats and cheese at roadside snack-bars and garages.

Le Marche desserts are not overwhelmingly sweet and often use sweetened cheeses like Pecorino or Ricotta as ingredients such as Calcioni and Piconi. Other desserts include a Pizza Dolce, or sweet Pizza and Frustenga, a cake made with raisins, figs and walnuts.