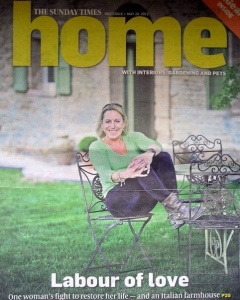 Cover – Labour of Love – One woman’s fight to restore her life – and an Italian farmhouse.

After her marriage fell apart, Camilla Wood had more heartache doing up this Italian villa – but, she tells Karen Robinson, it was all worth it.

Camilla Wood welcomes me to her home in Le Marche with a grim contemporary proverb: “Italy, people say, is littered with the rubble of unfinished houses and finished marriages.”

There may be a few naive souls who still harbour the belief that doing up a house in a charming corner of a sunny foreign land is an upliftingly painless process: Wood’s story should put them straight. But despite the heartbreak and frustration of the past few years (and that’s just from the builders), as she surveys the completed and simply furnished rooms, the swimming pool and her vineyard — all cradled in a 360-degree vista of unspoilt rolling hills — Wood radiates quiet optimism. “I feel the house has a purpose as a healing retreat,” she says.

So how did she come to be mistress of Monastero di Favari, this handsome 350-year-old villa with its own ensuite chapel? Back in July 2006, when she was pregnant with their thir child, Wood, now 40, and her investment-banker husband arrived on a flying visit from Hong Kong, where they were living at the time, and paid €220,000 (then about £150,000) for “a complete ruin and six acres” in glorious verdicchio wine country, about an hour’s drive inland from Ancona on the Adriatic coast.

“We wanted a European base where we could have our friends to stay,” she says. “It was a square farmhouse that had been a monastery, a gentleman’s villa, then a farm, with living space upstairs and the animals downstairs. For the past 50 years, it was a ruin.”

For a while, with money flowing from the east, the project went smoothly, overseen by a local architect and his nominated builders. The roof was replaced, the beamed ceilings repaired and the 600 sq metres of living space was opened out and reshaped following the original villa floorplan.

The couple also planted a hectare of vines and added a balcony to the first floor. “We spent quite a bit,” Wood admits.

One of the outhouses reveals evidence of further banker-budget features: controls for the underfloor heating throughout the first two floors, and even one of those fancy integrated vacuuming systems.

Then, in January 2009, Wood’s marriage broke down. Though still obviously devastated by the upheaval to her life and those of her three children, she doesn’t want to talk about the circumstances, and praises her now ex-husband for maintaining a close relationship with the kids. 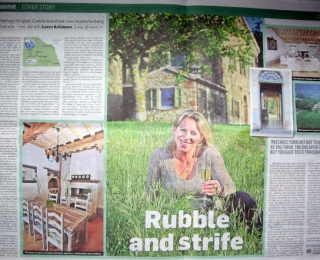 She says that within 36 hours of the break-up, she was on a plane back to England with Rory, now 10, Kit, 7, and Florence, 5. And from her new base in Somerset, close to her parents’ home, Wood could only wait while the lawyers worked out the terms of the divorce. Some might think that a half-finished Italian farmhouse was not exactly what a newly single mother of three might fight for. “But I definitely wanted it,” she says. “In the dark time, it was one tiny glimmer of hope for me to pick myself up.” Under pressure from friends and family, she did talk to estate agents about selling, but they said it was unlikely to find a buyer in its uncompleted state.

Instead, she endured “two very frustrating years” before some money for the Monastero di Favari project became available in January last year. What she came back to was not encouraging. While she was away, the vines were neglected and the newly planted hedges had died. The renovation had just stopped. The house itself had no floors or windows, and various items, including original doors, had gone missing. And it didn’t go well from then on. The swimming pool steps were put in the wrong way round and windows without traditional glazing bars were installed.

In retrospect, the situation had all the classic, proven ingredients that throw spanners into the works of such projects. She was a foreigner (though with a better-than-average command of Italian), she was now a lone female and she was rarely there, and the architect and the builder had taken on other work. Misunderstandings, and worse, led to arguments — in person and via some nasty texts — with the builders. Progress has been so slow that, as this year’s spring turns to summer, the house staggers to completion a whole year behind schedule. You can see how draining each and every stage of the process has been. She had to find new builders and pay them up front to complete the doors and windows. Even on the day I visited, she was aghast that a painter was asking a cheeky €800 for doing six chairs, a table and a chest of drawers. The whole thing has cost at least €1.5m.

“I feel so knackered and disillusioned at this stage,” Wood says in an uncharacteristically downbeat moment, before brightening up and pointing out the “love gift from the plumber”: an ancient wooden wagon tilted at a picturesque angle on the lawn.

And as we inspect the seven bedrooms and four bathrooms upstairs, the architect’s decision to keep the small windows clear of woodwork starts to make sense: they give maximum exposure to the breathtaking views, with the hilltop town of Apiro to the north and, in the other direction, glorious sunsets over the village of Poggio San Vicino. “Now I can live with it. Mistakes turn out to be not as critical as you think,” she muses. “You dream of la dolce vita, but you have to go through a bit of pain.”

Still, given the very clear vision she had for the house, it must have been hard to come to terms with the compromises. Some of the paint colours, which looked just fine to me, had upset her. The walls are various shades of white, with some Farrow & Ballish muted shades of detailing, the floors are wood or traditionally tiled, in a mix of new and recycled, and the overall feel is quite spare and bare, definitely not cluttered with stuff or clashing colours.

It’s spacious, comfortable, soothing and somehow timeless. Furniture was sourced from Somerset antique and salvage merchants. “Things in Italy are so expensive to buy, even junk,” she sighs, but she has made some canny finds in the nearby Marche towns, including the classic amphorae flanking the front door, a snip at €130 each.

On the ground floor, a stately hallway runs from front to back, and wide arches at either side lead into a dining room with space for 10, a comfortable sitting room with an open fire, a large study area, a den, a breakfast room and a well-equipped modern kitchen.

The chapel ceiling restoration uncovered some angel frescoes in the sky blue dome above the altar, and the vineyard has been replanted on its steep south-facing slope. Her hectare of vines, currently tended by a Dutch wine-maker based in the area, is planted with a mix of red grapes — montepulciano, sangiovese and merlot — to make a classic “Super-Tuscan”. This is unusual for an area celebrated for its whites — verdicchio and aromatic pecorino (delicious with the sheep’s cheese of the same name). But Wood knows her wines, having worked in the trade, and is setting up a business importing Marchigiani wines to Britain.

Wood, and Monastero di Favari, are both ready for the next act in their respective dramas. It’s on the holiday rental market for July and August. There’s room for three families, and it can sleep up to 15, with a glorious children’s dorm on the top floor under the eaves. She’s getting table football and table tennis kit in, a local caretaker will meet and greet and arrange wine tours in the area. A chef can be organised to come in and cook. It’s €2,900 a week for this summer only, below the going rate for the area. Transforming Monastero di Favari from a neglected ruin to a welcoming haven has been harder than Wood can ever have imagined, but the time has now come for the property to start paying its way. Wood is also keen for it to be used for retreats and courses, during the cheaper spring and autumn seasons — “meditation, yoga, post-divorce counselling, even.”

Wood had greeted me with a bit of modern lore, and she waves me off with a more ancient motto. “It will be a happy ending. Veni, vidi, vici kind of thing.” 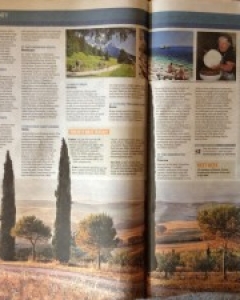 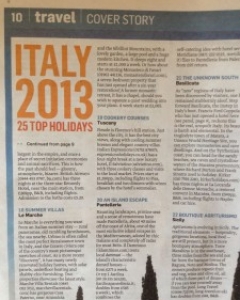 Le Marche is everything you want from an Italian summer stay – rural panoramas, old rambling farmhouses, the sea nearby. Urbino is often called the most perfect Renaissance town in Italy, and the Conero riviera one of the country’s most picturesque stretches of coast. As a more recent “discovery”, it has many newly renovated holiday homes, with solar panels, underfloor heating and shabby chic furnishing. Two properties showcase the latest style. Marche Villa Rentals (0845 052 3712 marchevillarentals.com) has gorgeous Casa Paterno near Amandola and the Sibillini Mountains, with a lovely garden, a large pool and a huge modern kitchen. It sleeps eight and starts at £1,000 a week. Or how about the stunning Monastero di Favari (01963 441136, monasterofavari.com) a seven-bedroom property that has just opened after a six year restoration? A former monastic retreat, it has a chapel, should you wish to squeeze a quiet wedding into your plans. A week starts at £2,065.” 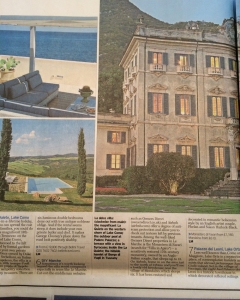 Among the well-liked Owners Direct properties in Le Marche is the Monastero di Favari – a sensitively restored 17th-century monastery, owned by an Anglo-Italian couple, that sleeps up to 15.